Since I had some time until the last seminar, I went on a 4-night 5-day visit to Chiang Mai, Thailand.
It is about an hour north of Bangkok by airplane, and compared to Bangkok, it’s a village, but the ancient city of Chiang Mai is a slow-paced, pleasant town. 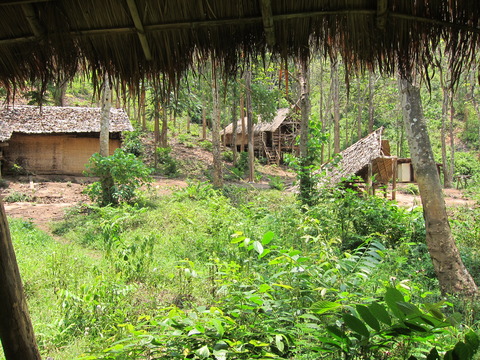 Short trekking near Lisu Lodge
The goal of this travel was trekking and visiting the hill tribes (Lahu, Akha, Lisu, Karen).
I walked the mountains and jungles north of Chiang Mai and also the flatlands visiting those villages. 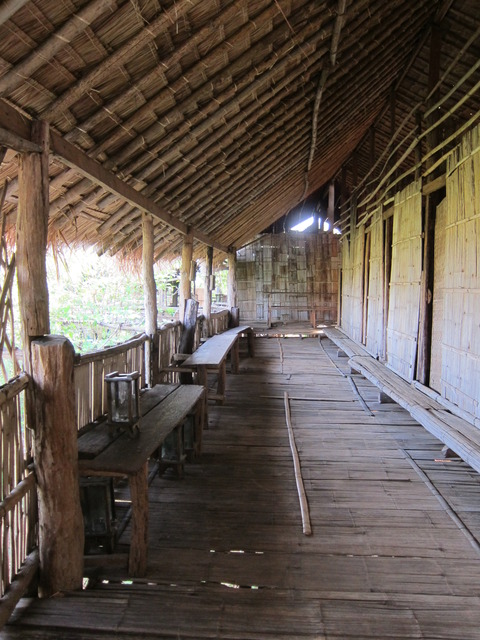 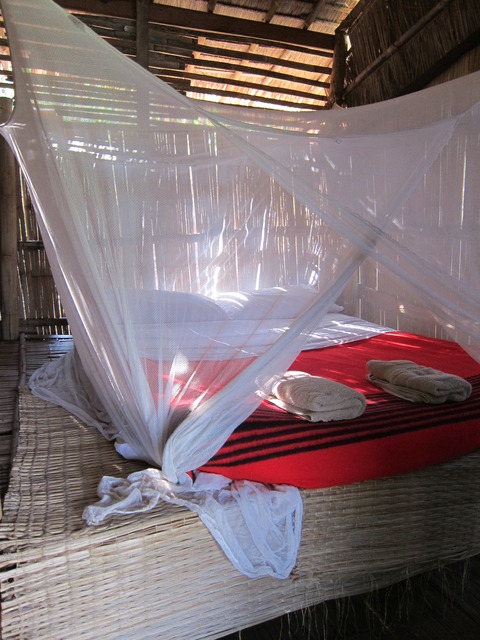 sleep under a mosquito net 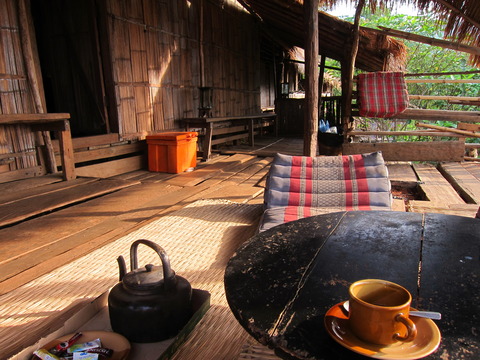 People live in houses with grass roofs and elevated floors so they were not suited for Feng Shui assessment.  However, observing each tribe’s village made me think of the correlation between “humans and the environment”.
Walking in the mountains, countless times, I saw plastic bottles, empty cans and empty snack bags scattered around. I thought disrespectful tourists threw away their garbage, however, it was actually the villagers that were trashing. 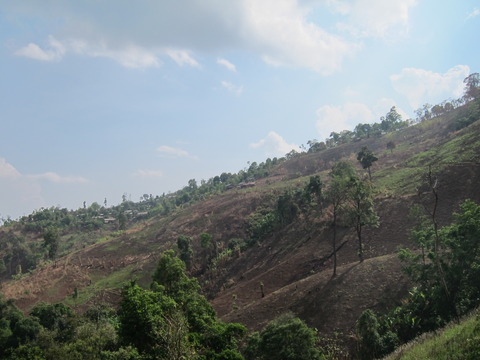 Come to think about it, I did start noticing the trash around the village entrance. To that, the guide simply said, “Whatever it is, residents here throw away their trash outside of their dwelling area”.
When I entered the village, I saw a dried up village house (hut?) as well as noticed how the area was trashed. Garbage was everywhere, even on the roads, and there was no sense of cleanliness at all.
Since this is a tropical area, I saw remnants of the slash and burn agriculture but since they cannot perform shifting cultivation and perhaps because they have been burning their land over and over again in a short period of time, I could not even feel the energy from the ground.
People living here seem to have an attitude of neglect.  Even dogs are constantly barking and I feel like I will contract rabies if any of them bites me…however, even though economically they are not wealthy, people’s houses are clean, their property full of greenery and well-kept, and people are full of smiles. Some of the villagers are even washing down the well-paved roads with water.
We were able to spend our time very comfortably, especially at the Lisu tribe lodge we stayed at, as the young Lisu people were very focused on working hard.
Many of the hill tribes have escaped wars and persecution that are happening near the Burma and Laos borders. 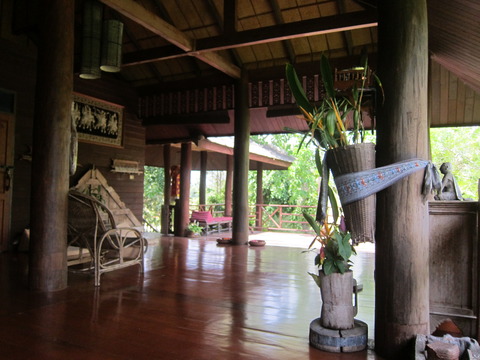 Khum Lanna resort
Most are poor and it is not uncommon for children to not be able to receive a higher education.  In addition, there are those that cannot obtain a Thai citizenship, therefore, cannot receive medical services either.
Traditionally, their cash income came from cultivating poppy which is the raw material necessary to create narcotics, however, they are currently shifting to agriculture because of the movement to eliminate drug trafficking.
However, there are still many villages that are suffering from poverty.
I am not sure which took precedence – people that were affected by living on bad soil or how people’s lifestyles and habits have changed the land to one without energy - but this trip made me feel once again, how the land and humans living on that land, strongly affect each other. 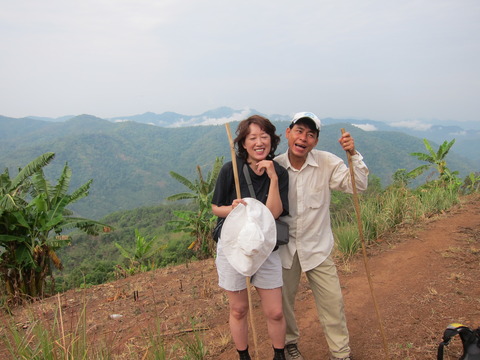 Did you know that around the world, there are different types of Feng Shui?
There is the Black Hat Sect (popular in the U.S. towards the end of the ‘80s), Korea’s Pungsu Feng Shui, India’s Indian Feng Shui and Okinawa’s Feng Shui Fushi.
Feng Shui may be an improvement process of the natural environment considering its land, weather and culture.  Approximately five years ago, I spent some time at the end of the year in India. 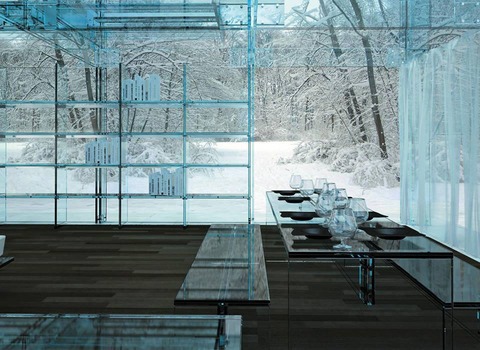 I stayed in the now deceased Sai Baba’s ashram for two weeks, in another ashram for a couple of days in the suburbs of India’s Silicon Valley Bangalore, and also spent a week in an Ayurveda facility in Mysol. 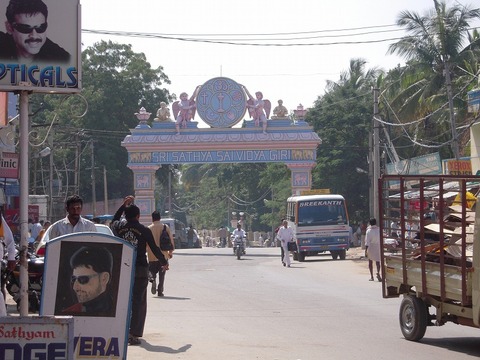 Perhaps you have heard about Abhyanga, which is a type of massage conducted by 2 therapists using herb oil, or Shirodhara, which is gently dripping oil on your forehead. These are purification methods to balance the body.  Generally, Ayurveda is considered to be traditional medicine in India, but in Japan, it is more popular as an Indian beauty treatment. 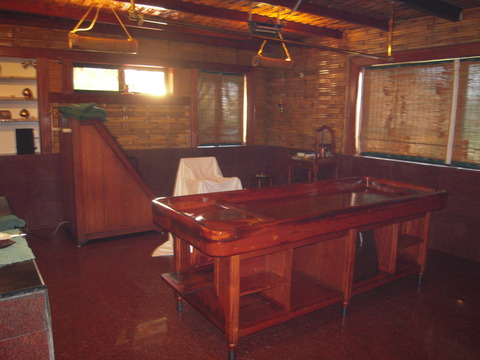 This time, let me talk about Indian Feng Shui, Vaastu Shastra.
Vaastu is based on the Veda which is the sacred text of India’s Orthodox Brahmins and is considered to be ancient India’s science of construction. My Indian friend tells me Vaastu is used when building houses.
By the way, Feng Shui is based on the I Ching. 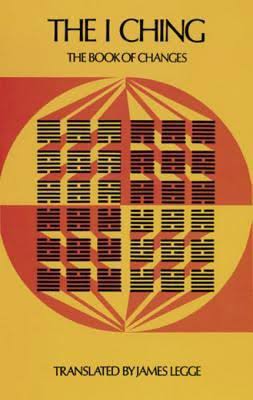 According to Vaastu, it is best to build a house according to certain basic construction guidelines.  Since the bedroom, kitchen and prayer room layouts and directionality are pre-determined, it is similar to Japan’s idea of the aspect of a house.
East is considered best to build the entrance as this is the direction where the sun rises.  The reason seems to be letting in the morning sun into the house to maintain one’s health. I suppose if you are healthy, then you can work, and if you can work, then you can make money. Come to think about it, there were many temples that faced the east.
The Indian owner of the Ayurveda facility that I stayed at was very knowledgeable about this Vaastu and because his house was constructed using Vaastu principles, I asked if I could see his house. 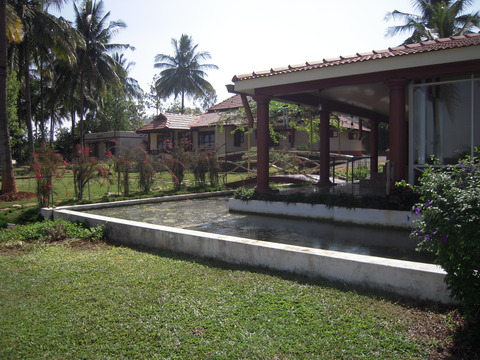 He became very interested in the fact that I teach Chinese Feng Shui, so with the luo pan compass in one hand, I was shown each room of his house.
He thought Chinese Feng Shui was all about the placement of dragon objects or pictures and he was full of misunderstandings, but without touching upon this, I decided to listen to his stories that promoted Vaastu.
However, Vaastu does not take into consideration when the building was finished, treats all houses the same, and does not consider the current time cycle, so I remember feeling many aspects not adding up.

Thinking about the current cycle, water was placed in a direction that should not have been placed allowing dirty water to flow.  There were also higher or lower locations inside the house, and when a marble was dropped, it started rolling around. I forgot which direction but heard that one direction should not be lower, therefore, the floor was even elevated…
In fact, in Chinese Feng Shui, a remedy may be to elevate or lower the sitting and facing direction of the house but this is only limited to the property outside and does not apply to inside the house.
There are many different branches of Feng Shui.  Perhaps it is silly to ask which ones are correct or if others are fraudulent.
It would be great if you can come across Feng Shui that you feel operates on the same wavelength as you and is helpful as well.